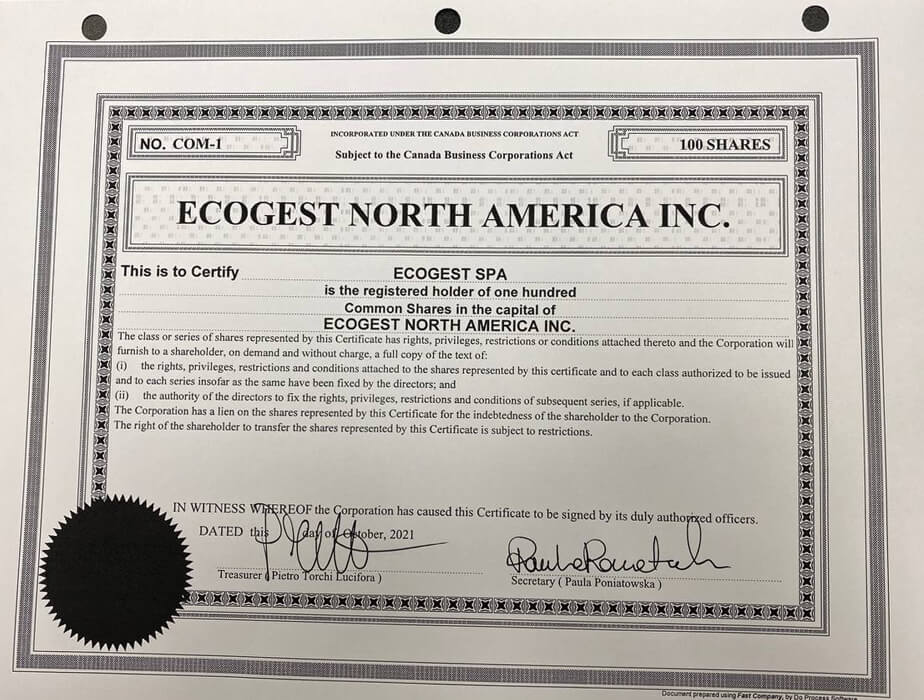 RAVENNA — After a long preparation, and despite the logistical difficulties related to the current complex historical phase, Ecogest’s arrival in the North American market is realized. “Ecogest North America Inc” was established today in Toronto, Canada, with the objective of entering the Canadian and US markets.

In the presence of the majority shareholder Valerio Molinari, and virtually from Italy of the CEO Michela Nanni, after formalizing the articles of incorporation, entrusted to the General Manager Pietro Torchi, the company incorporated under Canadian law was established and registered in Ontario.

In this start-up phase the new company will be led by the shareholders of Ecogest, the Molinari family, and the two directors, Piero Torchi for the Italian part, and for the Canadian part Marco Zambon, whereas support activities will be carried out in Canada by Paula Poniatowska.

The goal of this important and bold initiative launched by the Molinari family is to export the company’s know-how resulting from over 50 years of experience in the field of maintenance and management of green areas along roads and motorways in a market with great prospects, such as that of North America. “We have been working for years on this prestigious goal – declared Valerio Molinari – which represents an added value for an industrial model that over the years has allowed us to transform what was once a craft industry into a production process capable of addressing large surfaces and new perspectives.

We will follow directly the commercial development and start-up phase of the new company, never losing sight of the commitment on the Italian and European markets, which today places us among the main players in the sector.

We aim to offer support to Italian companies present in Canada and the United States in the construction of new and modern transport infrastructures, but also to replicate our winning models of environmental maintenance management, in light of the great transformations that climate change is causing throughout the continent.”